FROM ENERGY TO REPRODUCTION

Zinc was first shown to be biologically important more than 100 years ago when it was found to be needed for the growth of certain bacteria. In the 1960s, zinc was shown to be an essential nutrient for humans.

Zinc performs numerous functions within our bodies. Zinc is:

Dramatic evidence of the healing powers of zinc has been reported by medical research teams. In one study, ulcer patients who did not test deficient in zinc were given zinc supplements; a second group was given placebos. The ulcers in the zinc treatment group healed at three times the rate of the placebo group, and complete healing of ulcers occurred more often among the patients taking zinc.

Recent research has indicated that zinc supplementation may be recommended for elderly patients who have bedsores or are at risk of developing them.

Zinc has also been associated with reduced risk of damage to the retina that sometimes occurs in patients with diabetes. Diabetics tend to have low blood levels of zinc. One study has shown that diabetics with retinal damage have even lower zinc levels than diabetics with no retinal damage. Similarly, some studies indicate that zinc may help prevent macular degeneration, a major cause of blindness.

Zinc supplementation may also be important for postmenopausal women. Although most women lack sufficient calcium in their diets, when daily intake exceeds 1,000 mg, zinc absorption may be impeded. Because calcium intake is so important, researchers suggest that zinc supplementation may offset any negative effects of raising the daily intake of calcium after menopause.

The common cold is one of the most frequently occurring human illnesses in the world. More than 200 viruses can cause common colds in adults, including rhinoviruses (the most frequent cause), parainfluenza viruses, and others. In the United States each year, adults develop an average of two to four colds a year, and children develop an average of six to eight colds per year.

A number of controlled studies have shown that supplemental zinc had a beneficial effect in providing relief of cold symptoms. A 1996 study tested the efficacy of zinc gluconate lozenges in reducing the duration of symptoms caused by the common cold in 100 people who developed colds within 24 hours before enrolling in the study. Based on daily symptom scores for cough, headache, hoarseness, muscle ache, nasal drainage, nasal congestion, scratchy throat, sore throat, sneezing, and fever, the study showed that the time to complete resolution of symptoms was significantly shorter in patients taking zinc than in a placebo group. In fact, zinc reduced the duration of cold symptoms by an average of three days.

The most common cause of zinc deficiency is an unbalanced diet, although other factors may be responsible. For example, the consumption of alcohol may precipitate a zinc deficiency by flushing stored zinc out of the liver and into the urine.

In addition, zinc is poorly absorbed. Although the healthy human body contains about 2.2 g of zinc - more than any other trace mineral except iron - less than 10% of dietary zinc is absorbed.

The average consumption of zinc in the U.S. is 12.7 mg daily, but vegetarian and low-protein diets may provide less, as most of the best sources of zinc are meat, including oysters, liver, beef, pork, lamb, and poultry. Other good sources include spices, wheat bran and wheat germ, nuts and peanut butter, cheddar cheese, and popcorn.

Lack of zinc in the human diet has been studied extensively in Egypt and Iran, where a major constituent of the diet is unleavened bread prepared from wheat flour high in phytates which limits absorption of zinc. Zinc deficiencies have also been observed in young children from U.S. middle class homes who consume less than an ounce of meat per day.

Zinc deficiency is characterized by loss of appetite, stunted growth in children, skin changes, loss of taste sensitivity, dull hair, white spots on fingernails, and delayed healing of wounds. In experimental animals, zinc deficiency during pregnancy has resulted in malformation and behavioural disturbances in the offspring - a finding which suggests that the same thing may happen to human foetuses.

Zinc comes in a number of varieties and potencies. NeoLife chose the best of both. Our pharmaceutical-grade zinc is both high purity and high potency. 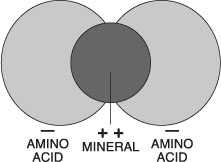 Take 2 tablets daily as a supplementary source of zinc.